Home > Veterans in Practice > SANCTUARY from the TRENCHES

SANCTUARY from the TRENCHES

At the Foundation for Peace in Warrington in February 2014, I met again the American Drew Matott, of the Peace Paper Project www.peacepaperproject.org & www.combatpaper.org and Margaret Mahan of Panty Pulping www.pantypulping.org.  With others, I was treated to a hands on introduction to paper making and silk screen printing.  Little was I to know how useful in the future this new skill would prove to be.

In November 2014, the National Trust, in collaboration with the North West Military Veterans Psychological Therapies Service, started a contemporary arts project exploring Dunham Massey’s role as a military hospital during the First World War.  Given SANCTUARY as a theme, Veterans were tasked to produce Artworks on small wooden labels.  These ‘labels’, corresponding to the number of patients treated at the hospital, are currently on display at Dunham Massey, Altringham, Greater Manchester www.nationaltrust.org.uk/dunham-massy. 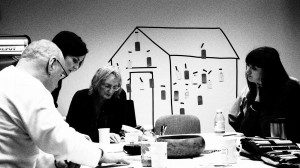 In 1916 Penelope, Lady Grey, Countess of Stamford, the window of the 9th Earl, wrote a letter to her son Roger to say she was considering making Dunham a hospital for Officers, as it ‘wouldn’t do’ for Tommies.  Something changed her mind as in 1917 it was opened as a hospital for ‘other ranks’ and Non-Commissioned Officers.

Visitors to Dunham Massey this year will see rooms in the main house transformed into the ward, nurses’ station, the recreation room, operating theatre and store room, as they where during its time as a hospital.

Taking advice from the Royal Exchange Theatre in Manchester, a team of scriptwriters spent several weeks researching though the archives, reading letters from the troops and former staff members to produce informal vignettes.  As visitors wander through areas of the house, they will come across short sketches of 3-4 minutes performed by actors from www.outsidestudios.co.uk dressed as doctors, nurses and the soldier patients. 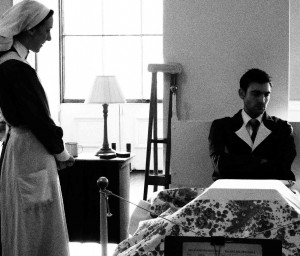 As a former soldier, I was some what surprised to find out that during the First World War, Tuberculosis was the leading cause of discharge on disability grounds.  This was due to weakened immune systems from the conditions the troops lived in, the poor diet and no antibiotics at that time.  The most common form of treatment was rest, a nutritious diet and lots of fresh air.  Pictures from this time at Dunham, show beds in the garden and huts where soldiers spent time in all weathers, using this ‘fresh air cure’, rather them than me! 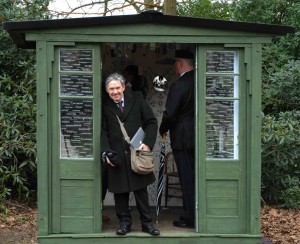 A reconstruction of one of these ‘Huts’ is now in the grounds of Dunham Massey.  As in the original, the front opens up to gain the maximum effect from this ‘fresh air cure’. On the widows of the front door to this ‘Hut’ the Rank and Name of all the patients have been printed on Perspex by Hot Bed Press www.hotbedpress.org using a similar screen method as Drew demonstrated at the Warrington Peace Centre. 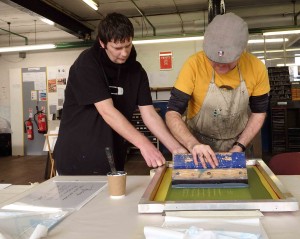 Some of the rather moving correspondence sent to Lady Stamford has also been reprinted using this method.  I found one particularly interesting, a letter from former footman Albert Cherriman of the 11th Manchester Regiment, wounded and taken prisoner at Gallipoli, as my Grandfather was also wounded there during that disastrous campaign with the 6th Battalion of the South Lancashire Regiment.  I wonder did they ever meet? www.gallipoli-association.org

Lady Jane Grey, the daughter of lady Stamford was only 15 at the out break of war but later became one of the Voluntary Aid Detachment volunteers. She obviously made an impression on the patients as she is mentioned many times in their correspondence.  Lady Stamford, Lady Grey and the Senior Nurse, Sister Bennett, all made photographic albums which inspired me to record this project in a similar way. 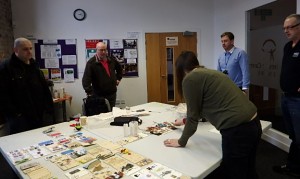 Inside the ‘Hut’ visitors will be able to see the Artworks made by us Veterans, using our creative talents and ‘Sanctuary’ as the theme.  Over 200 labels covered in photographs, pictures, paintings or 3D works were made to hang inside the ‘Hut’.  Each ‘label’, some double sided works, represent an individual servicemen patient that Lady Stamford, Sister Bennett, Lady Jane Grey, the doctors and other nurses looked after during the time Dunham Massey was used as a hospital and for the serviceman there at that time a SANCTUARY from the TRENCHES. 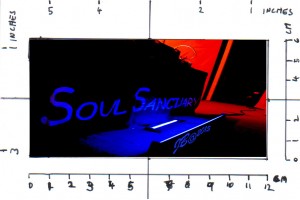