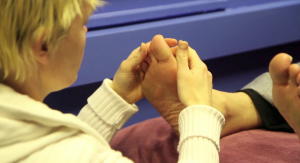 reflexology or foot massage to the uninitiated, which i was but now i have no fear of having my feet touched which has always been a problem since over tickling as a child. bernadette the holistic therapist began with the toes and worked her way around the foot and the ankles. I began to feel relaxed and at ease but nearly shot off the bed when my foot was touched initially. i soon found myself drifting into lah lah land. everyone was nervous of having their foot touched but after a few seconds they all sounded like theyd been smoking something they shouldnt of have.

so, now i have experienced yoga, tai chi and acupuncture and i have found reflexology the most enjoyable. having my feet massaged by a female holistic foot doctor was relaxing and tomorrow i will be having the full hour at the vets HQ. so get yourself down to the vets agency on breck road and allow yourself to be pampered as, as veterans we deserve it after all those years of square bashing.

don’t worry about what your sergeant major may think as ours was first in the queue!

just had my first full hour of reflexologyand fell asleep it was so relaxing i felt my legs had had a work out without me leaving the bed! i will definitely be doing it again at least once aweek. disapointed the person who came along with us yesterday mentioning no names EMILY GEE never tried refexology after trying acupuncture which she too was afraid of …maybe she hurt her foot after trying to reach the boardmarker yesterday when she had to stand on her toes ah hah hah …