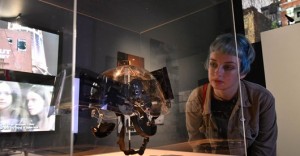 So what’s this helmet all about? Well a while back, prior to its prototyping, Krzysztof came and spoke with some members of our ex-forces digital art group, Veterans in Practice (VIP) to find out what we thought about the concept of a wearable device for sufferers of PTSD (Post-traumatic Stress Disorder), which he was looking to develop. Its primary function was to shield the user from potential triggers, providing them with portable protection and allowing freer day to day movement by reducing the worry and stress of what they may encounter enroute. It quickly became apparent that some in the group would be prepared to wear this but others, not so much. Nevertheless, both sides agreed that there was certainly value in the idea for those who wished to wear it. So off Krzysztof went to Poland where he worked with Polish veterans to further develop, and then prototype his idea; the device is on display in Gallery 1 along with a short video illustrating its use a little more, as part of the Liverpool Biennial 2016 exhibition here at FACT. 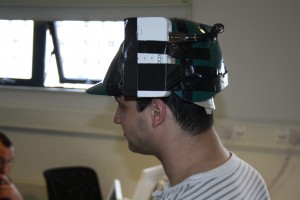 Once this prototype had been produced and used, Krzysztof returned to FACT to see what feedback we had for him and to talk about further development. Using a new design technique known as “research by design” we (VIP plus Dr Mark Wright) began a fairly open and free flowing process, discussing potential ideas and knocking up very rough full-scale models as we went, to test their practical feasibility and get an idea of how each idea could look if brought to life. This process in itself was a great vehicle for our creativity, new ideas being generated from what we saw and heard from the super fast, blue peter style prototyping.

We chose to develop not only the protection aspect of the device but also the sharing aspect of it. Raising awareness and increasing understanding of PTSD – what it is, why you catch it, how it can be overcome – is a critical piece of the puzzle. With this in mind, and also to accommodate the multitude of differing effects and resulting impacts all bunched under the same “PTSD” umbrella, we came to the conclusion that the device should be able to incorporate both protection and sharing of experiences. The means of sharing was also designed to be as flexible and customisable as possible for similar reasons. 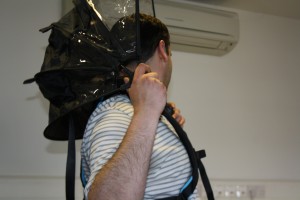 PTSD is not by any means a military specific condition, despite the connotations imposed on it by the media, nor are the after effects always immediately noticeable. Trauma is trauma, and by exploring new ways of expressing and then dealing with it together, we stand the best chance of finding a way to overcome the potentially crippling consequences of any trauma left unchecked. Those suffering cannot recover however, if those surrounding them have no understanding the illness, especially when this ignorance often means that well intentioned “advice” can make the scars worse – like picking at a scab. If you broke your leg or dislocated a shoulder, the course of treatment would include time to heal in a structured rehabilitative program. Nobody has a go at someone with a visible injury for wearing a cast or sling and going to physio in order to heal properly and prevent these injuries causing problems down the line, so why as a society do we not offer those with mental injuries the same consideration in order to lessen the scars? 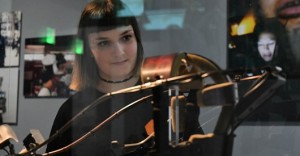 People are afraid of what they don’t understand, and from that fear, anger and ill-conceived judgments spring forth – perhaps because on some level we recognize something wrong with our own methods of dealing with traumatic events (or lack of them)? Trauma is trauma, physical or mental, military or civilian, male or female. With just a little thought, understanding and empathy become our best weapons to combat the negative spirals that result. Krzysztof’s work exhibited as part of the Liverpool Biennial for me achieves this, giving us a look from a different vantage point of various peoples’ struggles in exciting, thought provoking forms. Viewing his almost abstract solutions to share information provides a great environment for what, to many of us, are alien ways of viewing trauma. So come along before and see the exhibition for yourself and think about it, because two heads are better than one!