Mark Storor’s The Barometer of My Heart by Jay 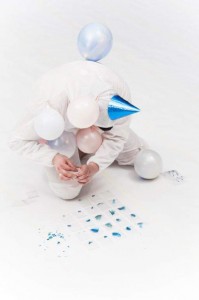 Where to start…? A small group of us from VIP went down on the first night of Mark’s show based in a health centre in Stratford. Split over three floors, each of which having an atmosphere of its own, I felt as though I was inside a broken mind moving through levels of consciousness as I travelled deeper into the fray. created by the balance of subtle expression and explosive outburst in both cast and set.
Disheveled nomadic entities wanderering along the corridors and staircases, brought to mind images of distressing thoughts navigating a disjointed mind. Demented tormented augmented roaring invades your ears as you wind a way though heartless hanging suits, emerging to find the cries are of a man trying furiously to shake off a pair of high heeled shoes taped to his hands. The contortionist putting his socks on with his teeth, in an inverted crab position, the lonely man stuffing cakes down his pyjamas, smearing jam on himself, all the while cocooned in a dirge-like, repetitive, droning, What struck me most in these and most of the other performances was the futility of the actions, easily comparable with the neurotic fixations associated with “mental illness”. Another big hitter for me was the caring aspect. The inclusion of a woman in the piece was interesting given the context and for me signified the feminine traits that really should exist in all of us (we are after all x-y as opposed to x-x). Masculinity (aggression, rigidity etc) is only half the story and without a caring, nurturing aspect to balance it the result can be a very unhappy chappy, as was on display here. This balance seems to be completely overlooked by the Hollywood driven and thoroughly antiquated stereotype of masculinity, and consequently by the masses. Is this one of the major issues we are facing today? Are people falling apart en masse? Is male suicide higher than female? How many men conforming to this stereotype are actually happy? You tell me…
There was so much on display and I haven’t even come close to covering most of it but truth be told, I haven’t made my mind up what I think about much of it yet, but I am still thinking, and probably will be for quite some time.The work we did over at bluecoat was played across multiple screens in multiple locations on multiple floors throughout the journey. And it was a journey. I don’t think anybody who viewed it could have left without being moved and possibly a little disturbed- but in the very best way. One of my favourite moments was when the balloon pinned to my hood was popped (on the video) and the red paint splattered all across my face like blood. I saw a woman physically recoil in horror as it played. It was pretty grim to be fair though.
The project as a whole was one of the most thought provoking pursuits I have ever been involved in and the discussions and my participation in it have irrevocably changed my perspective on masculinity, social stigmas and a host of other topics for the better. My inclusion in it has been an absolute privilege and its impact has begun a new and evolving concept for me of what life could and should be.