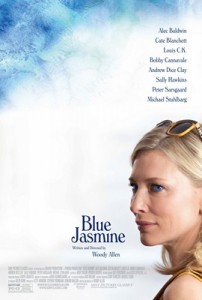 When the proverbial hits the proverbial all are covered …in, the proverbial, the proverbials here are thus…a divorce, the FBI and the main character and her family. “Hell hath no fury!”  Like the recipient of scorn. And I’ll say no more as its time for you to use that active imagination of yours…!

1951. Marlon –broody- Brando and Vivian –snooty- Leigh, appear in the atmospheric, claustrophobic, intense, Tennessee Williams story- A street car named Desire- which went from book to play and was then splashed onto the silver screen. A film regarded as a classic black n whiter from a bygone golden age and deserving its place as one of the greats of Hollywood Americana.

The wondrous weaving of woody Allen, has adopted and adapted the central theme (family grows apart, comes back together, falls apart) nurtured it and grown it up into the 21st century with this marriage which has given birth to this, his baby, Blue Jasmine!

The complexities must have been immense considering the cultural shifts n changes that occur over a decade never mind over a sixty-year period!

Woody Allen and Cate Blanchet combine together in this homagetribute to a classic story. A film that is shot with a lot more outdoor scenes than the 51 film and is told in flashback therefore it cannot capture the pressure cooker intensity of that 51 film but there are plenty of cabin fever moments.

The humour is light but dark and brought enough mental wry smiles and I felt awkward being amused watching someone in the throes of emotional and mental meltdown!

As jasmine is a pill popping, vodka soaked. Angst, neurotic and an extremely loose wobbly cannon in a story that gradually peaks to a bang and we witness the fallout and unravelling of a sad tragic character that is blue jasmine.

For woody aliens directing and story telling another 9/10…and for Cate I luv u Blanchet’s performance 10 out of ten!

Blue jasmine left me wondering…an’ wondering…an’ wond…whether woody Allen could give two other chunks of Americana the 21st century treatment and they are Citizen Kane for one, and two, one of my all time favourites Casablanca!

The evidence for me is here and clear he’s more than capable-me thinx-I thenk you!