As part of the film club itinerary VIP took a trip down to London for a tour of the Cinema Museum just round the corner from Elephant and Castle tube station. In all honesty I wasn’t particularly looking forward to it as I didn’t really think I’d find it particularly interesting.

As we approached the old Victorian building, with its imposing turrets water tower and typically stunning brickwork and design, but I wondered what significance this had to cinema history. The double front doors opened into an Aladdin’s cave of obsolete, yet completely charming, kit. Old projectors, signage and uniforms of cinema staff from hey days gone by half-filled the corridor- but we didn’t spend long here as we hung a right into the small cinema. 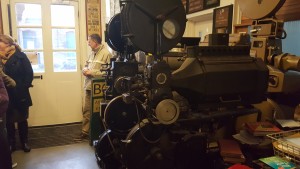 Here we sat on rows of seats about as old as my nan (which by the way were the comfiest cinema seats I’ve sat on, despite their age) and were given an introduction to the tour by our guide. He was in fact the co-founder of the museum, now a registered charity. He told us the tale of how he and his business partner had, over many years of hard work, had built the collection and saved many of the pieces on display from destruction. As he explained their journey I was drawn in by the obvious passion this man had for cinema and the gentle tones and manner in which he spoke left space to imagine the places he spoke of. 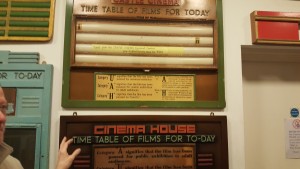 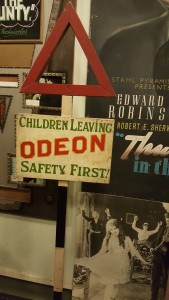 He went on to explain that the building had once been a workhouse, which explained it’s confused but beautifully intricate aesthetic- part jail, part water, tower, part home. “But why put a cinema museum in a workhouse?” I wondered. This question was soon answered as our guide explained that Charlie Chaplin had twice been a resident there as a child! The background info seemed to bring the whole place alive as we began our tour seeing and hearing the story of how cinema was born and became what we know today. For some the exhibits and stories and brought back fond memories; I could only imagine- but in my imagining I was well aided by the array of nostalgia I was surrounded by and the captivating narration of our guide. As he told of how the first film maker’s plied their trade it struck me just how much power to change society these people had in a world where moving pictures were brand new. How much of our current society is a reflection of those old movies, not just the physical actions captured on film, but the motives behind and subtext within them too. I wonder of those first pioneers which had started with benevolent intentions and who’s were more malevolent- who sought to educate and who sought to misdirect with 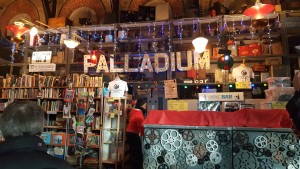 glamour, thus beginning the descent into our current media sham.

We climbed the stairs and the building expanded into what must have been the area where the work took place in the building’s somewhat sinister history. Now however, I saw only the spectacular architecture of the building and the comforting, almost bric-a-brac feel of the pretty large collection; every thing from of old reels and small lenses to a huge artwork of Chaplin and a 10 feet wide “PALLADIUM” sign. 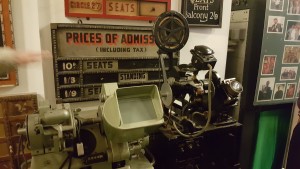 After a quick brew we were led back to the small cinema to watch a series of short films from various periods- the last few being in colour. I was surprised (well sort of) by which I found myself thinking of most- an old advert for the post office! Although dressed up with psychedelic imagery and a jaunty tune the actual message was very simple and more noticeably very honest and to the point. I am a sucker for psychedelia anyway but I think if we reverted to a more honest form of advertising
such as this then we as a population would get on better than if we continue the current method of essentially making people feel inferior, or that they need the product to achieve their desires. Suggesting without them we cannot. It highlighted for me how much we are being consumed by consumerism, advertising now constantly encouraging us to feed our insatiable desires, rather than taking care of our real needs; an ethos that seems to be spreading throughout our culture ever more these days. 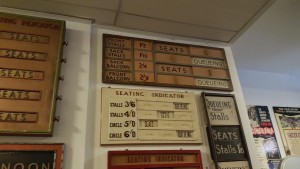 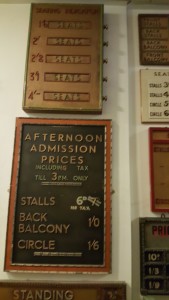 I’ve been in a few places where pain and suffering have once been daily routine, including a former concentration camp, a disused orphanage and mental asylum. In all these places there was a strange atmosphere, as if the building remembered the suffering within its walls. Here though, unless I’d been told about it’s history, I’d never have known of it’s grim history. I’m not sure if this atmosphere was eradicated as a result of the cacophony of rehomed materials, from places where happiness and excite 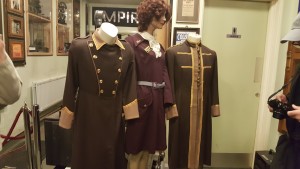 ment were the staple diet, the nature of the current residents or indeed both. This charity, funded by donations and these tours, is well worth supporting, reminding us of a time when what we take for granted today was still brand new and fresh, evoking thoughts of how people will look at us in years to come- a step back in time to a very different reality leaving me to speculate on what the future may bring.

So in conclusion then I can only recommend you go and see it for yourself, even if you don’t particularly consider yourself a cinema buff- you may be surprised like I was, by how enjoyable and thought provoking the whole experience was.