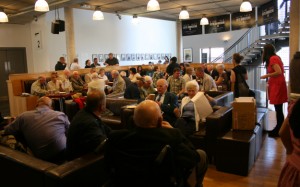 amazing to think this film was put together over a two month period! the staff at fact have done a wonderful job and all involved, the vip’s, the ww2 vets, and the children from holy cross school, hopefully, can show appreciation for a job well done.

the stories from the veterans were humorous and obviously poignant but to see the finished film viewed by three generations in one cinema was heartwarming as the children wore smiles as they seen themselves on screen.

each veteran was treated to tea and cream scones and was given an extended copy of the original showing of atlantic stars and also photo portraits of themselves with medals at the liverpool town hall.

from a vip ‘s point of view the whole thing was a wonderful experience and i thoroughly enjoyed the interviewing of the atlantic stars who i found honest and open about their times during service in ww2.

now that the battle of the atlantic has finished we can concentrate our efforts on our documentary about alternative therapies for veterans suffering with PTSD.

1914-1918 which was another catastrophe of the twentieth century which led to the second world war hopefully the kids in attendance here today can learn from a century of wars and with  the middle east a powder keg of paranoia and tampering by the west we can only hope the children of today do not have to endure war!